Skip Navigation Website Accessibility
Music education is at the core of everything we do. 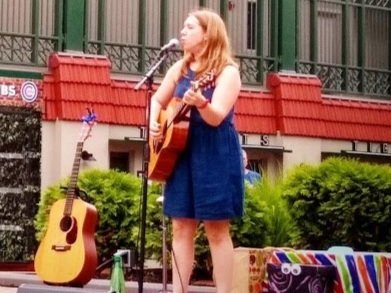 
Liz’s first memory is of begging her parents for singing lessons and she hasn’t stopped singing or playing since. The only music teacher her family could afford was the very elderly James C. French. Mr. French hadn’t raised his prices since the 50’s, but he gave her an education that money couldn’t buy. Mr. French was part of the Golden Age of American music, and had taught Old Holywood luminaries such as Yul Brynner (The King and I, 10 Commandments) and Susannah Foster (Phantom of the Opera 1943). He would teach Liz jazz standards that his friends had written and tell her about his regular vaudeville gig at the Oriental Theater in the 1920’s with Corinna Mura (the roving guitarist in Casablanca). Many of these stories were likely attempts to get Liz to give up her dreams of being a rock star and settle on something more sensible like being a big band singer or a church soloist all of which he had been. He was unsuccessful. As a young adult Liz trashed her voice trying to sound like everyone else singing rock music but eventually realized the most valuable thing she had was the uniqueness of her training. She went back to singing the way Mr. French had taught her, but updated the style to sing what she wanted to sing. After studying songwriting and guitar for 5 years with Charles Kim (The Astronomer, Sinister Luck Ensemble, Pinetop Seven) at the Old Town School of Folk Music in Chicago, she joined their faculty as a teaching and performing artist. She performs around the Chicagoland area and has performed at Millennium Park, Gallagher Way at Wrigley Field, Navy Pier, and numerous other local festivals and events. Liz teaches voice, guitar, and songwriting and brings her experience as a teacher, performer, and songwriter to every lessons. She loves helping students of all ages discover music, find their own sound, and reach their goals. Whether your goal is to be a big band singer, a better performer, a church musician, a songwriter, a casual guitarist, or a rock star, she will do everything she can to help you reach it. She wants you to know it is never too late to start pursuing your musical dreams.